Star goes on to shine at next level 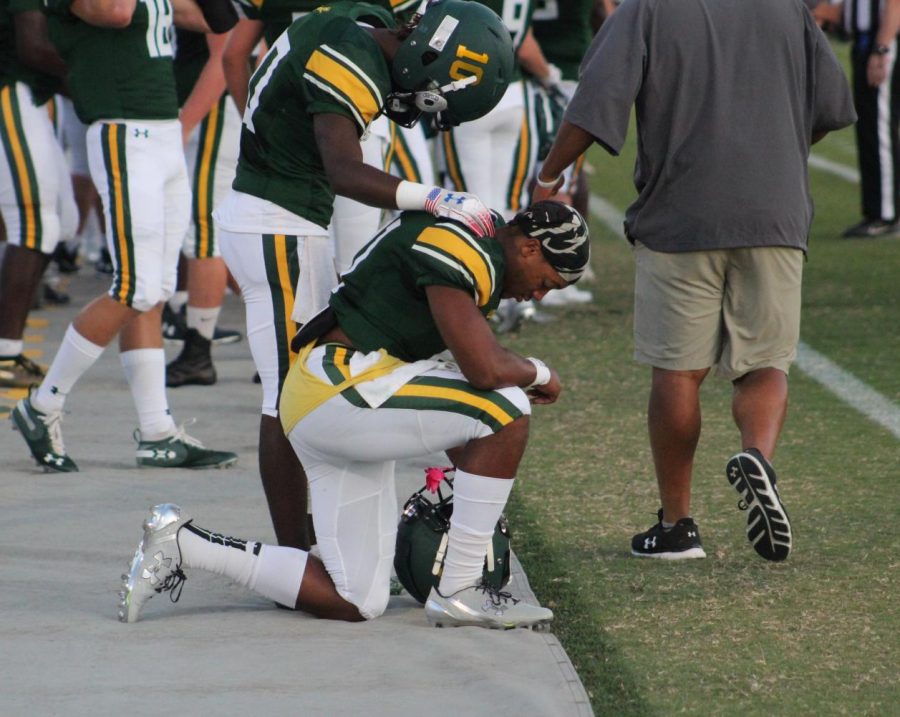 Senior Robert Morgan and teammate Jaquan Jones take a moment to gather their thoughts before the Chancellor game (2019-2020 season).

In times like these, with the world in such uncertainty, there is one thing that senior Robert Morgan keeps: a constant grind until the goal is reached.

For the past two seasons, Morgan has been a key part in the Louisa County High School success story. Whether it is returning kick-offs or running the ball into the endzone, his impact is unmatched. Morgan has a wide variety of skills which in turn earned him a scholarship to play football at Howard University.

“What attracted me to Howard University was that ever since I was young, my parents always had me looking into HBCUs. Howard was always in my top three schools I always wanted to go to,” Morgan said.

Howard University is not new for Louisa County running backs as Jarett Hunter (‘20) will also be attending Howard.

Quarantine has not stopped Morgan from developing his body for the next level. He has made it a goal for himself to work hard everyday. People all over Instagram have been watching Morgan and his intense workouts during quarantine.

“During quarantine my dad had bought us a weight set in order for us to be able to continue to lift. I would lift Monday, Wednesday, Friday. Tuesday, Thursday, and Saturday mornings I would go workout at the field with Noah Robinson. Monday through Saturday I always ran 2 miles. It felt like I never had a day off besides Sunday but I was okay with that because I know in order to be great I had to put in the work,” Morgan said.

With all the attention and praise that comes with being a college athlete from a small town, there is always going to be decisions that are very tough to make. Morgan will be graduating from high school a semester early so he can attend Howard early. This also means that he will not be playing in the upcoming high school season scheduled to begin in February. Even though his presence will be missed, Morgan is always going to have the back of his teammates.

“The hardest thing about deciding to graduate early was leaving my teammates behind that I’ve always called my brothers, but they respected my decision and I’m very thankful for them. I would like to tell them to control what they can control and what they can control is keep grinding to be something great this year. A lot of people are doubting them this year and this is the time to push and get better to prove the doubters wrong,” Morgan said.

Morgan’s support system has always been strong. The discussions were tough but at the end of the day, they only want what is best for Morgan.

The future is bright for this young star, Morgan is beyond excited for the opportunity to attend Howard.

“I am really excited about being able to get that HBCU experience. So many people just think HBCUs are just party schools, they are wrong, they help young African Americans such as myself get ready for the real world,” Morgan said.

Morgan’s support system is unmatched, from his family to friends, to coaches and teammates. Yes, the conversations are going to get hard when a decision of this magnitude is being made. But at the end of the day, they all want what is best for him.

Mogan is setting the bar very high for himself as he is about to begin a new chapter. His goals are not related to the gridiron at all.

“My one and only goal for my freshman year is to get on the dean list,” Morgan said.

As Morgan prepares for this huge jump in his life, all of the Lion community is behind him every step of the way.