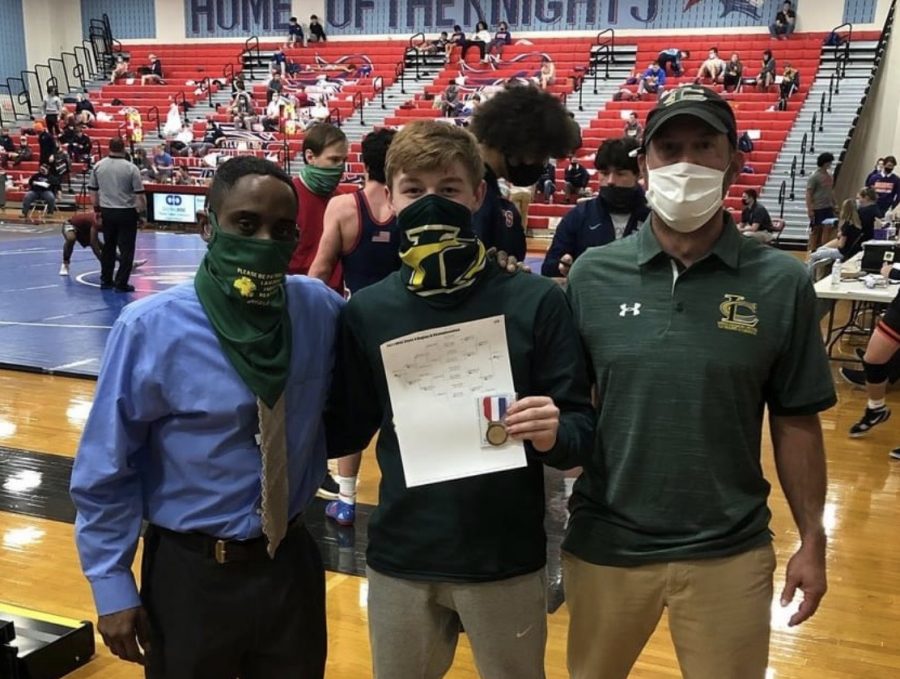 After winning the Region 4B Championship Greslick heads to states in Virginia Beach on Feb. 20

Following an impressive 11-1 regular season, junior wrestler Owen Greslick went into the regional tournament looking to climb the next rung on the ladder to the state tournament. Greslick plowed through his competition, securing pins in the first and final round to be crowned regional champion. Greslick will now be heading to states for the third consecutive year with a 14-1 record, only this year he’s determined to leave with nothing less than first place.

The Lion’s Roar: What is your background in wrestling or athletics in general?

Coach Stewart: Well, truthfully my background as an athlete would be that I am a soccer player.

I started in my youth in Europe on the Bundesliga Futball Travel Team.  Although I did participate in other sports such as t-ball, coach pitch, track & field, basketball, and football, mainly, I wanted to run and kick the ball on that Brazillian grass field.

Both my parents played professionally in their countries which led us to being athletic.

Everyone is unique and different in their own way; it is all about the heart of a lion you create. From there, my mindset changed and led to many years of a successful career as a world class wrestler.

The main reason I stuck with the sport is humility and perspective. Wrestling is a sport of highs and lows. There is nothing more humbling than having another person, your same size and age, beat you in the purest test of physical ability. Wrestling teaches the importance of taking life’s triumphs in stride, while also handling the disappointments with maturity and viewing them as valuable learning experiences. I am willing to be a role model for those, all while I continue competing.

The Lion’s Roar: How did you end up here as the new head coach for LCHS?

Coach Stewart: I returned from living in Colorado and training at the Olympic Training Center for a good 10-12 years, along with coaching three high schools there.

There were open doors waiting for me, which landed me a position at Georgetown Preparatory School of North Bethesda, Maryland. However, before that, I have been doing clinics, camps, showcases across the region where I have met numerous amazing athletes that wanted to pursue a dream of earning a hardware.

From there it was a lot of “Hey coach, can you come to my high school and coach us?” You know how these student athletes get when they meet you years back and still remember you years later. Eg. I met Dan Leale, Jr when he was only 11-12 of age showing me an autographed poster during a youth tournament where I did a clinic & autographing, [to] this day he still has that poster of me. I honestly couldn’t believe my own eyes until another wrestler’s parents (Mrs. Amy Sadwoski) happened to reach out to me and mentioned Louisa County High School [was] looking for a new head coach.

Coach Stewart:  Winning is great! But, it doesn’t happen by accident. Larger goals, such as state championships are an amalgamation of all the little process goals that an individual has set and achieved.

Wrestling teaches that any goal is attainable if you set smaller goals that will get you to where you want to be, then stick to your goals. This ability to turn a far-off dream into a tangible reality is an eye-opening realization, so I, as a coach, can build from the ground up before looking at bigger goals.

Let’s just have fun with PRIDE!  Dwelling on the past will only extend the future suffering. When you find yourself inundated by the shadow of adversity, take a step back. Then, understand your emotions. Recognize the importance of avoiding similar situations. Make a game plan moving forward. Execute and stick to your game plan – WINNING CONFERENCE TITLE, REGIONAL TITLE as well as having more women in the sport of wrestling as we have two so far. Give me 2-4 years and we will have STATE TITLE!!!

Lastly, coaching comes in such wondrous variety, and so do the athletes who are lucky enough to train under me, what I am looking forward to the most about coaching ….developing these cubs into LIONS whereas they believe in themselves too, knowing I will believe in them while having FUN!!

Thank you for taking the time to talk with me as I am excited to grow the sport and inspire the rest of the LIONS with PRIDE!!!